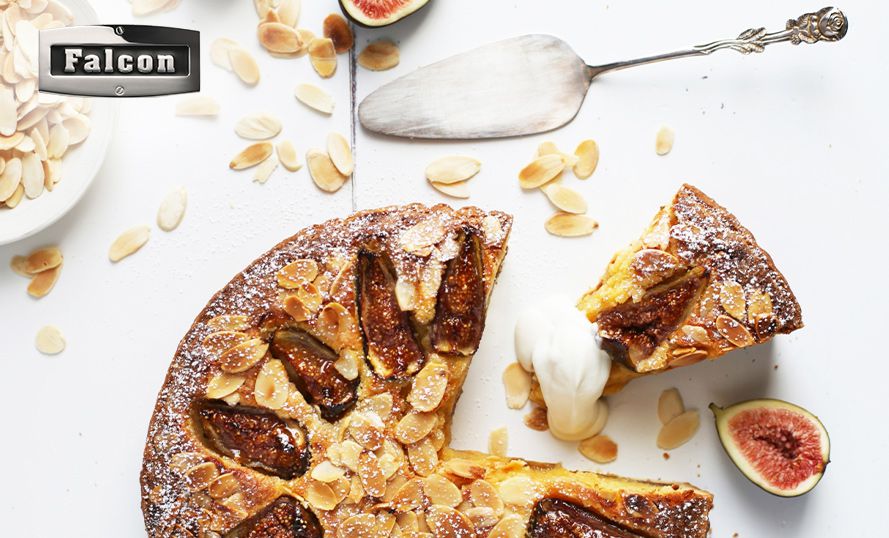 Step 1.
Grease a deep 23cm loose-bottom tart pan with butter, then dust with flour and shake out the excess. For the pastry, place the butter and icing sugar in a bowl and beat with electric mixer until pale and fluffy. Add the egg and beat followed by the flour. Form the dough into a disc shape, wrap in plastic and refrigerate for two hours. Roll pastry out between two sheets of baking paper to about 3mm thickness and refrigerate for another 15 minutes to firm up again then use to line the tart tin, trim excess pastry.

Step 3.
For the filling, beat butter and caster sugar until pale and fluffy, gradually add eggs one at a time; fold in the flour, almond meal, a pinch of salt and the amaretto. Spread the fig compote over the base of the tart, then spoon over the filling and smooth the top. Arrange the fresh figs on top, cut-side-up (don’t push figs into mixture), and scatter over the flaked almonds. Bake for 50-60 minutes or until golden and set. Cool completely and serve with a dollop of the honeyed ricotta and a dusting of icing sugar.

Step 1.
In a medium saucepan, place the figs, sugar, lemon juice, vanilla and cinnamon and bring to a boil then cook, stirring often, uncovered over a medium-low heat for about 45 minutes until figs have broken down and the compote is thick and dark. Remove cinnamon quill and cool slightly before sealing in sterilised jars. Compote will keep for up to three months.