This article originally appeared on Gizmodo, view the article here.

While we’ve been talking a bout 8K for a few years now, you may not have seen it in action yet. The main reason for this is because native 8K content is scarce right now. Most of it is exclusive to demo reels. But thanks to sophisticated upscaling technology, there’s still plenty of use for 8K right now.

Upscaling has been around in various forms for a little while now. But for those new to the concept, it essentially takes content with a smaller resolution and expands it to fit a larger resolution while maintaining as much detail as possible. For example, taking native 1080p content and upscaling it to display on a 4K TV.

The biggest hurdle is making an upscaled image look natural and high quality. As you can appreciate, taking a resolution of 1080p (1920 x 1080 pixels) and stretching it across a 4K resolution (3840 x 2160 pixels) isn’t going to look so flash without a helping hand.

After all, when you boil it down for this example, a single HD pixel needs to stretch across four to fit on a 4K screen. If it was upscaling HD to 8K, it has to stretch that same pixel into a whopping 16 pixels. So how does it fill in all that extra space?

With no processing, expanded images tend to look “noisy,” which can give it an unnatural, pixelated effect as you can see below on the left.

How does upscaling fix this issue?

One way TVs can fill in these empty pixels is by looking at the pixels around it. By analysing the colour of surrounding pixels, the TV can essentially guess the best colours to go in the empty space, but these older methods can still leave the upscaled image looking a bit off.

The results usually depend on the method being used. Some will simply make a vacant pixel the same colour as its nearest neighbour, producing a kind of zig-zag effect known as aliasing.

Other TVs with more processing power might compare two or more pixels around the vacant one and use a colour that’s better suited to the overall image, although it can still result in blurry edges.

In a nutshell, Samsung fed a huge amount of video content of varying qualities to an AI and trained it to more accurately fill in the gaps created in the upscaling process.

The content was used to teach the AI how to effectively upscale by working in reverse. It took high-resolution images and downgraded them to a lower resolution while noting the visual data lost in the process. It then used that data to help fill in the blanks when re-upscaling to replicate the high-resolution image.

Samsung was able to use this information to create a databank based on objects which its TVs can apply to the 8K upscaling process. For example, it can recognise a blurry apple and accurately upscale it based on the numerous apples it processed during training. It even knows which shade of green or red it should use based on the apples it’s seen in similar situations.

It can also adjust the detail based on the kind of content being upscaled, so sport will still look like sport and film techniques used by cinematographers will remain as they were intended. 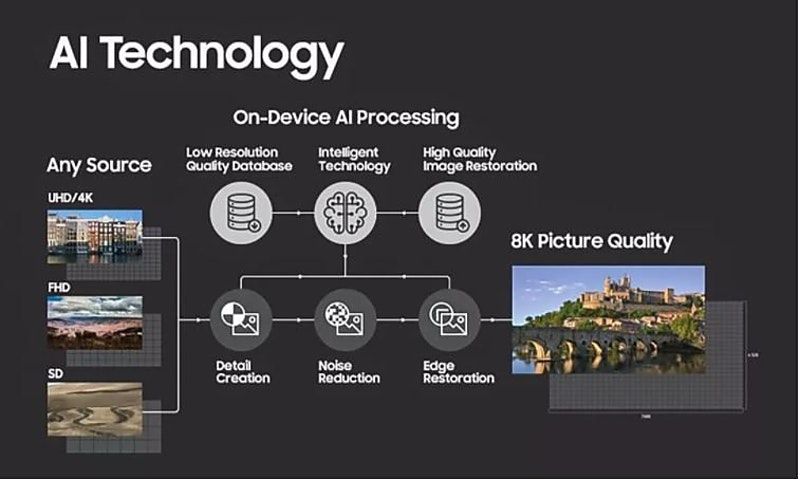 You can read more about it here.