The Key Differences Between Mirrorless and DSLR Cameras

This article originally appeared on Gizmodo, view the article here.

If you’re new to the world of cameras outside of the one attached to your smartphone, knowing your way around can be tricky. Assuming you really wanna set a standalone camera apart from the aforementioned smartphone, you might be looking at DSLR and mirrorless models but are not sure of the differences.

While both have their pros and cons, the one you choose will ultimately come down to what you want out of a camera. Below are some of the key difference between mirrorless and DSLR cameras.

DSLR — or Digital Single-Lens Reflex — cameras use a complex series of mirrors to direct light from the lens to the viewfinder, giving you a real-time preview to frame your shot. When snapping a picture, the mirror flips up, allowing the light to hit the image processor and capture the photo. The system also directs light into the DSLR’s dedicated autofocus sensor.

A mirrorless camera, as the name suggests, does away with the mirrors and instead directs light from the lens directly onto an imaging sensor, generating a digital preview of the image on the camera’s display. Many will also simulate an analogue viewfinder digitally. From a technical standpoint, this is one of the biggest differences between the two types of camera.

When it comes to how they perform, some will point to DSLR cameras as having better autofocus features and less viewfinder delay, but it’s fairly negligible in current models, with the gap continuing to close with each new mirrorless release.

The same can be said about mirrorless autofocus, as the feature is constantly improving. The Nikon Z 6II, for example, sporting a 273-point hybrid autofocus system with enhanced eye and animal detection for both video and still photos.

Because DSLR cameras need to house a mirror system and its associated moving parts, they tend to be bulkier and heavier compared to mirrorless systems, which have a comparitively simpler construction.

If portability is a concern, you’ll be able to fit more into your camera bag with a mirrorless setup. On the other hand, smaller cameras handle differently, particularly when large lenses are attached. Consider what’s important to you and you’re sure to find a solution among the plethora of options available.

The Nikon Z 7II presents a mirrorless middle ground when it comes to being lightweight while still catering those looking for an ergonomic design and weather sealing. 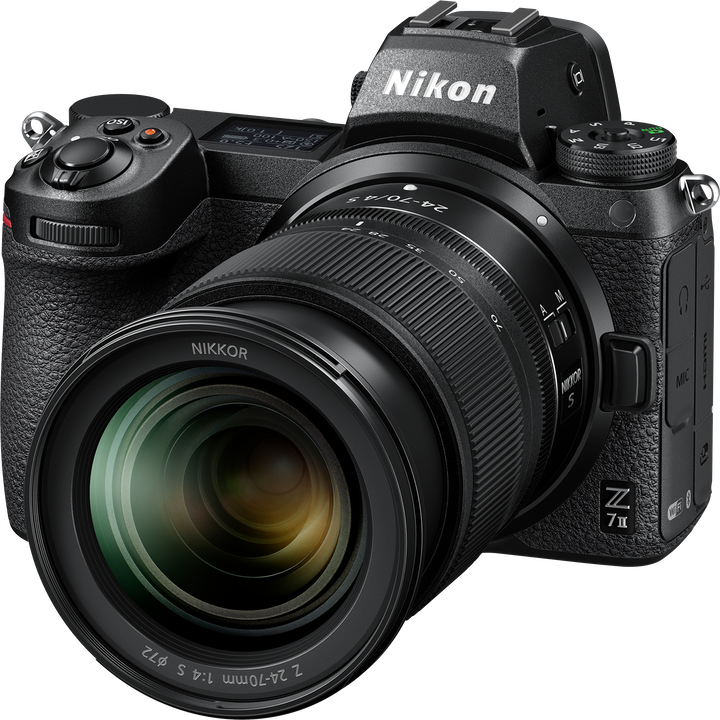 Without having to mechanically flip up a mirror when shooting, mirrorless cameras tend to have a speed advantage over DSLRs. This allows for fast, continuous shooting and various high-speed features like those on the Z 6II, which can capture a burst of 14 still shots in 1 second.

The Z 7II goes a step further, with a 45.7 megapixel BSI sensor capable of continuous shooting at 10 frames per second for up to 77 shots.

While it’s fair to argue that DSLRs generally win in the battery life department, this is only really applicable if the DSLR doesn’t have an LCD display or it’s not in use. If both are using a display it becomes a fairer fight, but if both had them switched off, the mirrorless would still need to power the digital viewfinder.

Having interchangeable batteries makes this less of a problem than it seems and on average, a single charge can still get you around 300 shots on a mirrorless camera. An entry-level DSLR can get you around 400.

When it comes to lenses, DSLR cameras have a wider variety to choose from but like many other points of comparison, this one is continuing to narrow as more mirrorless varieties are introduced into the market.

At the end of the day what you choose will depend on what you’re after in a camera. Most comparisons will tell you that the market is heading towards mirrorless, so if you’re looking for something compact, suitable for both stills and video and affordable, it’s probably the direction you’ll head in, as well.